Uncle Sam I Want You Poster & Its History

The Uncle Sam I Want You recruitment poster below is still one of the most famous “promo” posters in the world! Yet, it’s funny how many people hardly know who came up with the concept and who the model for Uncle Sam was… 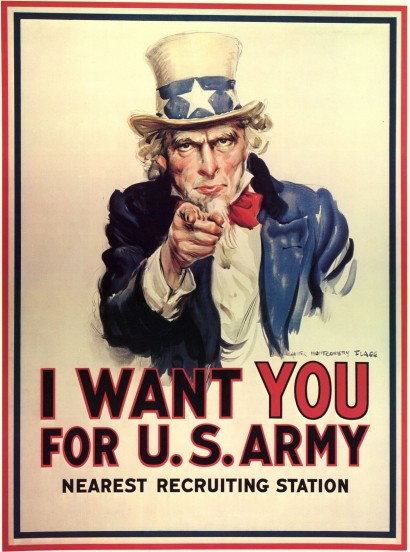 Who created this iconic poster?

This iconic poster was created by the artist James Montgomery Flagg on a summer’s day in June 1916. It was originally created for Leslie’s Illustrated Weekly Magazine for their patriotic 6th July 1916 edition.

In 1916, there was increasing international pressure on the U.S. to join World War 1 and the delay in joining was being discussed across America in all social circles.

The poster was later adopted by the US Government for propaganda purposes and it was incredibly effective in swelling the ranks of the U.S. army when they did eventually join the war on 6th April 1917.

At that time, Flagg was worried that the U.S. needed to expand their army in case they entered the war and as he paced up and down in his Manhattan apartment stressing over the looming deadline for his Magazine cover, he suddenly stopped as his gaze fell almost simultaneously on his face in the mirror and upon Alfred Leete’s “Britain Needs You” poster created in 1914.

He had a moment of revelation and got to work drawing; it was to his credit that on that day, he created the most famous poster in history and the face in the poster? It was none other than Flagg himself!

Flagg claimed he was on such a tight deadline that he did not have the time or the resources to hire a model. In fact, later on, President Roosevelt congratulated Flagg on his resourcefulness in saving model hire costs.

What does the poster represent?

The man in the poster represents the personification of American Government: Uncle Sam. Visually, the American public were being told that men were needed for the U.S. Army and it was their time to fight.

Although the poster was originally for a Magazine, it was used as an effective propaganda tool to encourage Army recruiting all over the U.S. Between 1917-1918, over 4 million copies of the poster were printed in the U.S.

The power of advertising was as strong in the early 20th Century as it is now. The only difference is that we now have enhanced digital media methods at our fingertips, even for non artists and laymen. There’s no need to be an expert to print or design your own poster or creative designs these days!